In and Out of the Fold

Susan Hensel’s textile work is a dizzying journey of shifting colors and arresting, yet abstract, form. In and Out of the Fold presents biomorphic shapes and geometric patterns with sumptuous texture, representing Hensel’s long history with transformative, sculptural work. Special Exhibit- In and Out of the Fold.

The Special Exhibit- In and Out of the Fold series starts off with revels in overwhelming color, serving to create moments of intense sensation. In a world of increasing speed and economic literal-mindedness, Hensel slows downtime through visual intensity, pausing these dominant concerns. But the pieces do not merely prefer the transcendent to the physical, rather they unite the two modes into a shared space.

The pieces here seem to unfold in a self-same manner, like fractal structures in nature. It’s as if they arrive out of themselves, appealing to some inner sense of being that the viewer brings with them. That self-becoming speaks like a message not in words but in Hensel’s shapes and colors. It is form describing form itself. This is not the language of philosophers and accountants but of tree limbs sprouting and embryos growing. The wordless is expressed through the common language of biological forms.

By using the intrinsic shapes of nature, the viewer recognizes something of themselves and every other living thing inside the beauty of the object. It is through that beauty that unity can be seen expanding beyond boundaries of ego and linguistic category.

Hensel’s work does not try to elaborate on the mysteries of existence. Instead, she moves into the mystery, exalting it above all else as an aesthetic experience found in the folds and colors of every piece. In these strange shapes and occluded moments woven in textiles, Hensel upholds the aesthetic power of the ineffable.

This subtlety of meaning and sophistication of form is achieved through a variety of means. Hensel works in multiple disciplines and materials, primarily focusing on digital machine embroidery. Her process is a hybrid of traditional “craft” and modern production technology, a productive tension that runs through her career.

Hensel’s work has appeared in hundreds of exhibitions, including dozens of solo shows, across a fifty-year span. She is the recent recipient of grants and residencies from the Jerome Foundation, Minnesota State Arts Board, and Ragdale Foundation. 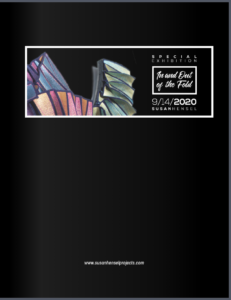 Want a catalog? Get it here.