Ingrid Restemayer returns to Susan Hensel Gallery  for the second time with a new fiber art series titled Talk to Me. These pieces continue the strong compositions and driving aesthetic focus of the artist’s oeuvre, developing the threads she has woven so far while introducing a new set of idioms. Using handmade paper, printmaking and embroidery, Restemayer gives us a quiet, contemplative view of the ways humanity communicates with itself.

The works combine colored paper as a background to etchings of animals, with embroidery that stitches the work together and adds textural elements on its own.

Growing up in North Dakota, Restemayer spent many of her formative years staring off in the distance at snowy fields broken only by the right angles of plowed earth. This blank serenity and logic of ordering space appear here in the work, but they have been transformed into something else, a way of working against a world dominated by the rapid transmission of information packaged in that same right-angled thinking.

Since leaving those Northern plains, Restemayer spent time in New Zealand and the Dalmatian Coast, studying the use of fiber art in maritime culture. And so in this new series, she integrates the design of flags to inform her backgrounds, with the meanings translated in the title. The bold colors and striking graphic sensibility make messages that can be read from afar. Communication at a distance — that critical component of life at sea and, as we have all experienced, during a pandemic — is here digested and transformed into another step in the artist’s interrogation of human communication. 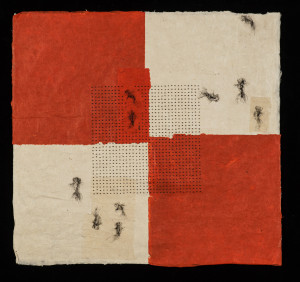 Consider “Stranger Danger” (2021, was inspired by a flag that indicates “You are running into danger” and the knots by the flag “Position Indicator.”). Here, a checkerboard of white and red is occupied by swimming fish, the center stippled with French knot embroidery (what the artist calls the “code”), creating a fifth square overlaid onto the field. It is diagrammatic, but of what we aren’t quite able to grasp. The fish are grouped and separated according to some obscure categories, though we only intuit this because this is the way humans have learned to document differences. What is it in us that needs to sort these fish?

But now, with the relationship between the background and the vocabulary of flags, Restemayer assures us of a meaning, gives us a lexicon to translate the colors and shapes. And yet, the task reveals a truth much more complicated than all that. There is still mystery, still so much more to unpack and sift through. This assistance to the task proves that the barrier is yet larger than we imagined.

The overall effect goes beyond communication and instead creates profound suspicion, made from the very visual cues we use to present information as the elements of her bricolage. In this way, Talk to Me asks the viewer to accept or reject these ordering principles. She presents syllables, we must collect them into words, sentences — or allow the works to become something less, or more, than talk.

While this series forces us to confront patterns of thinking and communicating, it also produces a more directly felt effect: a serene monotony that slows us down. Here again, information and the way it travels is the key to enter. In an age of constant, rapid transmission of information, the pieces are so unlike the content of daily life. They contain an arcane form of communicating at a distance, made slowly, carefully by hand. And so, they almost appear as relics, memories and, most crucially, reminders. 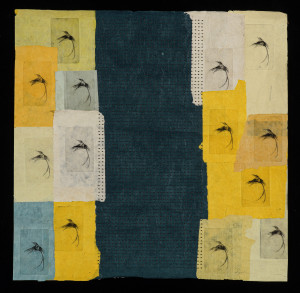 “Come to Me” (2021) gives us multicolor columns that contain birds caught in the fight upward into flight. The layout was inspired by a flag that instructs, “Steer Towards.” These vertical stripes of activity frame a navy blue field only interrupted by thin strips of Restemayer’s “code.” This plaintive message calls us in — come closer, closer still. And we hear in it what we have all been struggling to say, beating our wings for the message to take flight: set down the screen, overcome the pandemic, be here, be together, come to me. In this piece, so much of the process and the inspiration for the series culminate in a single act of semaphore that cuts against the extreme isolation brought by digital communication technology and an ongoing health crisis.

And it is a message that can only be grasped in such a slowly made, traditional, universal way. The arduous process itself lends power to the communication. This is not a message written and sent and received in seconds. None of these pieces are. They are crafted, intricately considered. Effort and labor constitute the meaning of these works as much as any other element.

Talk to Me elucidates and confounds, borrowing from forms of communication to direct our attention to the mind’s activity and the meanings behind the utterance. She has produced a series of signs that speak to us directly but deliver another message that passes under the running boards of normal text, normal chatter. They are symbols that, when we take time with them, open to reveal something all-too fragile inside: every human’s struggle to be understood.

Restemayer received her education in fine art at the University of North Dakota and Whitecliffe College of Art and Design in Auckland, New Zealand. She is the recipient of several awards including a Minnesota State Arts Board Artist Initiative Grant and a Jerome Foundation Emerging Fiber Artist Grant through the Textile Center of Minnesota. Her solo exhibitions have appeared at the Penny George Institute, the Nina Bliese Gallery, the Benedicta Arts Center, a previous series at Susan Hensel Gallery, among many others.

Learn more about Ingrid at ingridartworks.com
If you are in or near Minneapolis visit her during open studio events in the Northrup King Building